Posted on 30th October, by admin in Collations Book Forum 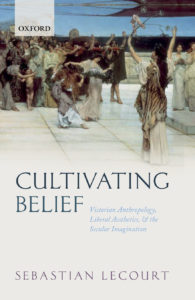 The V21 Collations: Book Forum welcomes Kathleen Frederickson (UC Davis), Sara Lyons (U of Kent, Canterbury), and Scott Thompson (Temple) in conversation about Sebastian Lecourt’s inspired and inspiring—or perhaps reservedly “hope[ful]” (199)—new work Cultivating Belief: Victorian Anthropology, Liberal Aesthetics, & the Secular Imagination (Oxford, 2018). Locating in Victorian anthropology an understanding of religion as “a matter of racial and ethnic” (2) identities (in the plural) rather than as a universally “private belief” (16), Lecourt compellingly reveals a crucial and surprising strain in Victorian thinking: writers like George Eliot, Matthew Arnold, Walter Pater and Andrew Lang used the anthropological conception of the varieties of religion to elaborate, with only seeming irony, an “aesthetic secularism” that inclusively imagined “the different religions of the world…as distinct racial inheritances the could be incorporated by a cosmopolitan self” (15). As Lecourt argues, “these Victorian writers were trying to conceptualize an alternative to the austerity and abstraction of classical Protestant liberalism” (16). In the many works he addresses, secularism includes religion as “a kind of aporia that constantly reminds many-sided liberalism of its own potential intolerance” (19).

Despite what Lecourt records as an eventual, if not entirely inevitable, intolerance to the lasting “internaliz[ation]” of religion by secularism, “the broad ideal of inclusion” remains just that—an ideal. As such, it endures as something we moderns might continue to strive for, both in hopeful recoveries of the expression of those ideals as well as in modern conceptions of liberalism that have imagined themselves as antagonists of faith-based politics. In this, Lecourt helps us to imagine—even if that is all we can ultimately do—a more truly inclusive future.