Posted on 27th March, by admin in Collations Book Forum 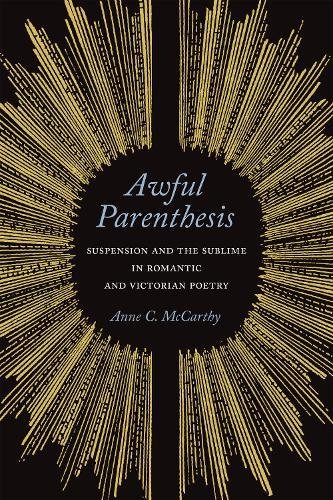 The V21 Collations: Book Forum welcomes A.K. Huseby, John Schulz, and Annmarie Drury in conversation about Anne C. McCarthy’s Awful Parenthesis: Suspension and the Sublime in Romantic and Victorian Poetry (Toronto, 2018). McCarthy’s impressive new study “argues that suspension… [– as the] seemingly paradoxical concatenation of activity and passivity, of presence and absence — marks an aesthetic response to the ontological crisis of contingency and discontinuity as it was experienced in the literature of the nineteenth century” (6). Spanning the widest imaginable range of representations and conceptions of suspension, Awful Parenthesis explores variations in the writings of Samuel Taylor Coleridge, Percy Bysshe Shelley, Alfred Tennyson and Christina Rossetti, while detailing their relationships to many other contemporary authors, artists and thinkers besides. McCarthy thus persuasively and eloquently elaborates the associations between concepts that were crucial to Romantic and Victorian thought, not least of which are suspension and the sublime.

Arguing that “suspension is the occasion of the sublime, and of a particular kind of sublime experience that shatters narrative consciousness and faith in what Percy Shelley will call in ‘Mont Blanc,’ ‘the secret strength of things / Which governs thought’” (14), McCarthy elegantly ties the work of Romantic and Victorian writers to critical theoretical interventions of 20th and 21st century philosophers. McCarthy, nevertheless, does not collapse distinctions between writers then and now, maintaining clear distinctions while exploring meaningful relationships between them, as she also does between Romantic and Victorian writers. In so doing, she offers some new critical strategies for considering the way texts “generate their own, often non-linear, temporalities as sites of composition, revision, publication, circulation, reading and rereading, collecting and recollecting” (19).