Part-Victorian Imagination: On Being a Victorianist of Color 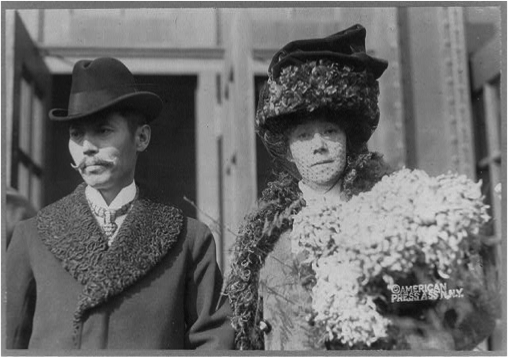 In 1911, Yei Theodora Ozaki, a half-Japanese, half-British writer and translator, sent 3,000 cherry trees to Washington, DC on behalf of her husband, the mayor of Tokyo.[1] Thirty years later, while those cherry trees must have continued to bloom and grow, the American government would force over 110,000 people of Japanese ancestry, more than half of them American citizens, into internment camps under Executive Order 9066. A few years ago, when stories of those camps resurfaced on social media in response to state-sanctioned racial discrimination in the United States, I could not help but think (perhaps narcissistically) that I would have been interned had I been born 50 years earlier.

I first encountered Ozaki’s photograph during the course of my dissertation research on transnational aesthetics in turn-of-the-century Anglophone and Japanese picture books. As a half-Japanese woman, I felt a strange sense of dissonance. I had believed I was not supposed to exist in Victorian history. Yet there Ozaki appeared in a black-and-white photograph, staring back at me with her recognizably half-Japanese features. She wears Western clothing: a stole and an asymmetrical hat with a veil. Her expression is enigmatic, withholding. A biographical sketch that accompanies Ozaki’s 1909 Warriors of Old Japan romanticizes the mingling of Japanese “heart” and Western “intellect” that allowed her to “discern the greatnesses and smile indulgently at the littlenesses” of both cultures.[2] At first glance, Ozaki seems to wear a knowing expression aligned with this view of hybridity. When I look again, however, I imagine that I detect a hint of melancholy. As I well know, to exist in the interstices of racial, cultural, and linguistic difference entails, not only mobility, but loss. When you are “half,” you are not only both, you are neither.

When I was in high school, I played an ensemble role in a production of the musical Jekyll & Hyde, and for the first time, I became viscerally aware of how poorly I fit within the Victorian past. I had grown up reading books like A Little Princess and Jane Eyre, the same Victorian classics that my mother read in postwar Japan. Therefore, I had long since learned to project myself into all-white fantasies: to not only wish I were a white British heroine, but to actually become her within the sphere of my imaginative life. Because of this, it was not the act of imagining myself as a Victorian that I found difficult. Rather, it was coming to terms with the ways my body would betray me in that act of identification. Wearing a Victorian costume, I witnessed the splintering of my imagined and embodied selves: my face too round, my hair too dark.

Now, as a graduate student, I often reflect on the relationship between my multiracial, multicultural identity and my scholarly interests. I tend to approach Victorian culture through a critical, postcolonial framework, but not always. I feel pulled between what I see as the necessity for critique and the ways in which Victorian texts continue to enchant me. I further question whether critical distance would not simply be a disavowal of my attachments, a reinscription in which I let exclusions define me. Why can I not love Jane Eyre on my own terms? Wendy Brown calls this a “wounded attachment,” an identity carved out by historical injury.[3] In my case, these wounds remind me not only of the distortion and erasure of racialized peoples within Western imaginaries, but also of my personal history of distorting and erasing myself to fit within them. In what Anne Anlin Cheng names “racial melancholia,” “invisible wounds… form the fissures underneath visible phenomena of discrimination.” Cheng writes, “Even as racism actualizes itself through legal and social sanctions, it is animated through imaginative procedures.”[4] If our inner landscapes may seem to be matters of private rather than public concern, we might observe how fundamentally broken are the “imaginative procedures” animating our world today.

In my teaching, I therefore try to account for reading’s imaginative dimensions. I teach at a predominantly white university in the Midwest. Many of my students come from small, rural towns and express that they have never before experienced a place so racially and culturally diverse. I am conscious of the fact that I may represent the first person of Asian ancestry with whom they have had a substantial interaction. Meanwhile, students of color find themselves in an appallingly small minority. Hate arises within the student body: slurs are shouted out of windows, death threats slipped under dorm room doors. When I face my students, I feel responsible for attending to these dynamics. Doubtful that we can trust one another, our conversations sometimes feel strained. We are not altogether sure how or if to speak. As Sara Ahmed writes, affects are social and political. They stitch together collective bodies: “Emotions are not simply ‘within’ or ‘without’… they create the very effect of the surfaces or boundaries of bodies and worlds.”[5] I ask myself how the texts I teach might help suture our broken relations.

In particular, I question what it would mean for me to teach the predominantly white canon of Victorian literature at my institution. I believe that a syllabus assembles not only ideas, but affects. Based on my personal experiences, I know that as a person of color it is emotionally exhausting, and potentially disheartening, to repeatedly confront the wrongs imposed upon those who share your identity. You are forced to bear witness again and again to racism’s historical entrenchment. Compounding this fatigue, our literary education most often presents us these wrongs through texts by white authors, a situation that may unintentionally contribute to the silencing of marginalized voices. For example, in Lu Wheat’s preface to her 1906 book The Third Daughter: A Story of Chinese Home Life, I read of “the Eurasian or half-breed who comes upon the stage wherever the white man sets his foot or pitches his tent.”[6] It goes without saying that this statement is prime for critique. Wheat writes as if “half-breeds” appeared by happenstance and were not frequently born as the result of rape or within broader structures of colonial violence. Yet, while I believe there is value in teaching students to interrogate such silences, I also believe that the flip side must be teaching literature by writers of color. Students need to experience the imagination performing reparative work. In a time when images of racial violence circulate on social media, these affective, aesthetic dimensions warrant our cultivation and care. As Audre Lorde states in her famous essay “The Master’s Tools Will Never Dismantle the Master’s House,” “Survival is not an academic skill… Our personal visions help lay the groundwork for political action.”[7] Anti-racist pedagogies should not be limited to critiquing racism—as if to be a racialized subject is merely to have violence inflicted upon you—but need to help us understand how our imaginations might heal and be healed.

As Victorian studies responds to today’s political climate, the field would benefit from thinking more intentionally about its nearly all-white canon and about the lack of racial diversity among those who study it. Ponjaunee Chatterjee and Amy R. Wong have argued as much in this forum, expressing the hope that Victorian studies “become more inclusive in this era of exclusion: both of different kinds of scholar-teachers and the diverse populations of students that we all teach.” Practically speaking, as Ryan Fong has suggested, opportunities abound for new textual pairings and constellations. For example, what would it look like to pair Zadie Smith and Charles Dickens without eliding difference? How can we refuse Dickens a privileged position? And are we willing to do it? Victorian studies moreover cannot teach race and racism without engaging critical race theory and without welcoming a greater number of scholars of color. The Medievalists of Color provide a model by calling attention to the harms that have resulted from the dearth of racial diversity among scholars in a field now appropriated by white supremacists.[8] At Victorian studies conferences, I have similarly found myself among a tiny minority. I am typically the only person of color in a given room. To take just one example of the normalization of whiteness in the field, a person I regard as a friend once stated casually during a conversation on being an American Victorianist, “We’re all European if we go back far enough.” When I pointed out his error, he apologized and took back his statement. However, while I respect and admire my colleagues in Victorian studies, I believe the lack of urgency on this issue ought to be seen as untenable.

By noting the perils of antiquarianism in Victorian studies, V21 has potentially created openings for new scholars and new approaches to enter the discipline. “Strategic presentism” may in fact be especially meaningful for those of us who experience “our” history as a loaded concept. If Victorian history does not belong to us, what can we still gain from imagining it?