Di Wu: On Presentism and Historicism: Wilde and the Legacy of Aestheticism in Contemporary China 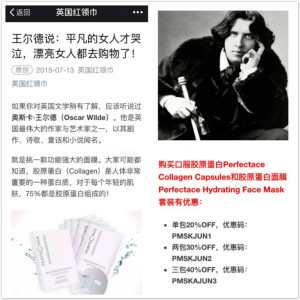 In contemporary China the fondness for Oscar Wilde’s artistic ideal and Chinoiserie has become a new trend in the fashion world, comprising a large range of phenomena, from using Oscar Wilde’s portrait to sell beauty masks to Chinese customers (figure 1) to selling an eponymous French perfume in the Chinese market (figure 2), from Numéro Homme China’s cover of a Victorian dandy to Bazaar China’s innovative concept of the Oriental Dandyish-Gentleman (figure 3). Since these cultural phenomena offer fascinating insights into contemporary culture, I wonder whether Aestheticism should not be held as transcending its status as a merely historical phenomenon. To argue this, I make use of some of the suggestions put forward by Sebastian Lecourt in his recent essay for V21, “The Light of Asia and the Varieties of Victorian Presentism”. 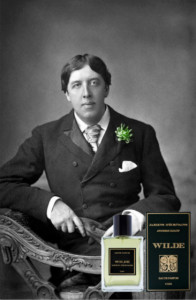 Since I started researching this “retro” aspect of Aestheticism in modern China, one question has become a Damocles’ sword hanging over my research: how to bridge the temporal and geographical gap between Victorian England and modern-day China. I argue that both Wilde’s works and his persona have been consumed in China as artifacts which articulate a contemporary aestheticism; and that Wilde’s works and his performance as a dandy have especial relevance to the younger generation in China, who are struggling with the post-industrial processes of commercialization and globalization. Yet I have been informed that my method might be “problematic”: to engage with modern perspectives on the narratives of the past, the argument goes, is to commit the error of presentism. 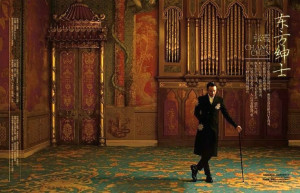 However, I think presentism is far from an error or a “sin”; rather, potentially, a perceptive approach that will rejuvenate Victorian Studies. As the “Manifesto of the V21 Collective” insightfully notes, many aspects of our modern mode of life and ideologies were inaugurated in the Victorian period; the cultural production of our age owes a debt to the aesthetic forms that were forged and improved by the Victorians. Hence to assume a neat division between the Victorian and the modern period is in itself problematic. The limitation introduced by chronology is even more problematic when it comes to the concept of British Empire. The chronological lag between the cultural development of the colonies on the one hand and the metropolitan center on the other renders the attempt to draw a line between the past and the present – as well as between presentism and historicism – implausible if not entirely futile.

Therefore, I insist on reading Victorian literary texts and cultural contexts anachronistically in my study. The necessity of expanding the term “Victorian” is very well stated in the special issue. Here I want to address some interesting aspects in Sebastian Lecourt’s essay that helped my research.

In “The Light of Asia and the Varieties of Victorian Presentism” Lecourt introduces the anachronistic approach of Caroline Levine and Priya Joshi. According to Lecourt, Levine and Joshi’s method is novel and opens up the immediate boundary or limitation that has long been associated with the historicized term “Victorian”. As Lecourt comments, “[t]he refreshing thing about this approach is that it expands the idea of the Victorian temporally as well as geographically, opening up a kind of presentist optic that permits us to read Victorian literature beyond the horizon of its immediate historical context.”

With this “presentist optic,” I argue since the term “Victorian” is no longer “a national or period marker” (according to Lecourt), neither is the Aesthetic Movement a historicized artistic movement that only existed at the fin de siècle. Though it ceased to be popular in England after the first decade of the 20th century, it lived on and grew prosperous as a belated trend in China in a way that is still relevant today. While for political reasons this trend became dormant in China for a few decades, it came back even more vigorously since the 1980s. The Aesthetic Movement’s imprints on modern China’s fashion industry which I presented at the beginning are solid representations of a serious conflation of postcolonialism, neoliberalism, and global literary, cultural and commercial discourses. The phenomenon of the Anglophile in contemporary China – intriguingly coinciding with the “golden era” of Sino-British relations – is deeply embedded in the Victorian framework. It would be hard simply to “display” or to “preserve” a history by investigating this cultural evidence, for it does not have the linear history that some Victorianists struggle to exhibit in the first place.[i]

Nevertheless, as Lecourt points out in his essay, Jesse Rosenthal has reflected that Levine and Joshi’s presentist approach could turn into “a kind of Whig history in which the past functions primarily to lead to ourselves.” Admittedly Rosenthal’s worry is well grounded, and indeed it is easy for scholars to commit “Pareidolia,” to borrow a psychological term, to twist history in the direction where we imagine or wish it to go.[ii] To answer this objection, Lecourt suggests that by looking at works of the immediately subsequent era might be a safe approach to resist the “Whig history” inclination. Furthermore, our contemporary anachronistic reading can be read in comparison with those of other ages; such comparison will, in fact, embolden the anachronistic reading.

Lecourt’s method, therefore, steps out of the debate between historicism and presentism and offers a good example for those of us studying Victorian afterlives. My current case study, for example, centers on contemporary China’s reception of the Neo-Victorian fashion. While Levine and Joshi’s presentist approach might make my research problematic in taking circular fashion trend as evidence for the present impact of the British empire, adapting Lecourt’s approach helps me to solidify my arguments with historical readings from 19th-century feudal China as well as 20th-century Nationalist and Communist China. I am able to construct my argument by comparing China’s reading of the Aesthetic Movement, in particular, Oscar Wilde’s literary texts in different periods. Thus, I do not think that my research is too “Whig”, for I have historical materials to support my argument, while at the same time I am not limited to the rather dogmatic historicist “displaying” of the Victorian period.

To conclude, V21 has helped me think about how to defend my research as both intellectually stimulating and objectively accurate in the historical sense. This is especially important, I think, in Victorian Studies. The fundamentalist way of practicing historicism—that of simply presenting a certain period without engaging in any conversations with the past—should be pushed to the margin. Lecourt’s method combined with Levine and Joshi’s method are enlightening and indicative in reading Victorian texts in this millennium in which popular culture keeps borrowing aesthetic ideas from the 19th century. The Victorian phantom lives not in dusty tomes, but rather in the form of TV dramas, Gothic metal music bands, cosmetics, fancy clothes and perfumes, in our living rooms, galleries, concerts, wardrobes, and social media across time and land.

[i] This term is widely used by mass media to describe Sino-British relationship during China’s president Xi Jingping’s visit of the UK in 2015. After the Brexit and the resignation of David Cameron, new Prime Minister Theresa May affirmed that “[t]he golden era of British-Chinese relations will continue”. In the recent G20 Summit, major press houses such as Reuters have reported May’s statement under the title May Hails ‘Golden Era’ For UK-China Ties as Nuclear Power Row Looms.

[ii] Pareidolia is “the imagined perception of a pattern or meaning where it does not actually exist”, according to the World English Dictionary, as cited in “Pareidolia: Why We See Faces in Hills, The Moon and Toasties” on BBC News Online.