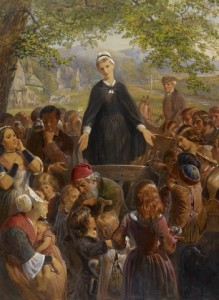 Spend enough time researching the nineteenth century and you will come to the realization that people in the Victorian period did not read literature in the same way that we do. Victorian bestsellers commonly appear on college syllabuses and in the subject headings of recent entries on the MLA International Bibliography; however, the criteria that we prize in the period’s writing are quite different from those of our nineteenth-century counterparts.

Consider George Eliot’s Adam Bede.  Today Eliot’s novel is widely recognized as one of the most ambitious and formally complex works of the Victorian period.  Early readers, however, saw a strikingly different text.  Kathryn Hughes notes that although Adam Bede was commercially successful, it did not garner much serious contemplation upon its release in 1859.  Instead, readers were primarily “charmed by the pastoral, amused by Mrs. Poyser and her pithy sayings, [and] shocked by the obstetric details […] of Hetty giving birth in a field” (Hughes 205).  Adam Bede inspired Queen Victoria enough to commission a painting of Dinah Morris’s preaching on the village green.  However, most readers saw the novel as little more than a form of light entertainment.  Their glib reaction led Eliot and G.H Lewes to briefly fear that “Adam Bede had been mistaken by reviewers and readers alike as nothing more than an accomplished potboiler” (Hughes 205).

The disjunction between Adam Bede’s initial reception and Eliot’s aspirations for the novel highlights a common problem for Victorianists:  How do we define our object of study?  Should our Adam Bede be the one that is shaped by twenty-first century constructions of Eliot as an author?  Or should it be the Adam Bede that we suppose existed for nineteenth-century readers?  Perhaps it should be neither of these options, or some combination of the two.

Alex Woloch’s “Bleak House:  19, 20, 21″ gives us one way to deal with this dilemma.  Connecting the rise of critical interest in Bleak House’s narrative experiment with the reification of Jamesian criticism in the middle of the twentieth century, Woloch asks us what it would mean for critics to inhabit a perspective in which Bleak House’s dual narration once again fades from view.  In weighing the benefits of this turn, Woloch suggests that “there is something in the Victorian blindness” to form: “to be uncertain about how or when form starts also means we can be less limited or restrained in demarcating where form might end.”

I expect that Woloch would readily agree that a renewed formalism has already been put into practice in some of the most interesting and important work to emerge in the humanities in recent years.  As I comb through the PDFs on my hard drive and examine the books in my office, I find numerous examples of scholars advancing our understanding of form through the examination of longstanding critical shibboleths.  Caroline Levine’s Forms (2015) and the recent special issue of Representations on Description Across Disciplines edited by Sharon Marcus, Stephen Best, and Heather Love are just two of the many titles that spring to mind (to say nothing of Woloch’s own work).  The appeal of such projects is closely tied to the willingness of these scholars to take the problem of form seriously, both in the context of literature and the interpretative models of the humanities more generally.  As such, they provide an excellent example of how we might understand a novel like Adam Bede today.

It is certainly true, for instance, that while formal analyses of Bleak House often take Dickens’s dual narration as their starting point, a similar preoccupation exists amongst literary critics with the prominent voice of Adam Bede’s narrator.  Without returning to the “blindness” that Eliot and Lewes saw in Adam Bede’s early readers, we might complicate this aspect of the novel by shifting our focus from style to structure and scale.

There is, to my knowledge, no critic that has considered the effect of Adam Bede‘s publishing format on the novel’s shape.  Yet we should be reluctant to take this feature of Adam Bede for granted.  Following the success of Scenes of Clerical Life (1856-7), Eliot’s publisher John Blackwood initially planned to serialize Adam Bede until Eliot’s reticence to disclose details about the novel’s plot forced him to scrap those plans. [1]  Nevertheless, Blackwood’s satisfaction with initial excerpts of the manuscript soon afforded Eliot a great deal of flexibility in publishing the novel on her own terms in 1859.  One wonders how Adam Bede’s origins as a Victorian triple decker might be understood to function as a shaping mechanism (as opposed to a delivery system) for Eliot’s work.  Woloch’s observation that our understanding of form emerges slowly over time suggests that there may still be something to learn from this quintessential Victorian novel.

To engage with questions of form in Victorian literature, I don’t think we need to pretend that the dual narration of Bleak House or Adam Bede‘s prominent narrator are unimportant.  But it is undoubtedly to our benefit to remain open to the possibility that these aspects of Dickens’s and Eliot’s novels are far from the only sources of meaning.  Whether we bring other formal dimensions to the forefront by embracing that old “Victorian blindness” or applying a scrupulous examination of longstanding critical truths, the important thing is that we remain reflective about our reading processes and open to shifts in perspective that are as profound as those that characterize the nineteenth century’s most innovative writing.

[1] See Haight 252-3 for an account of Blackwood’s discovery of Eliot’s identity and early reaction to Adam Bede.