Posted on 9th August, by admin in Collations Book Forum 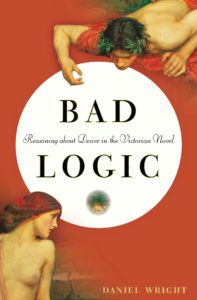 V21’s Collations: Book Forum welcomes Dustin Friedman, Ellis Hanson and Tara Thomas in conversation about Daniel Wright’s lively, pleasurable (or perhaps pleasure-full) and discerning new work, Bad Logic (Hopkins, 2018), which begins, appropriately enough, with this incitement: “it can seem a kind of magic to put into language the vagaries of desire” (1). Wright’s book “considers four forms of bad logic—contradiction, tautology, vagueness, and generality—that appear in the Victorian novel as mechanisms for giving form to the formless thing that is erotic desire, for putting into language desire’s force, its opacity, its fuzziness, and its uncertain scope” (2). Combining that clarity of argument with a playfulness fitting to the occasion of an argument about desire, Bad Logic devotes each chapter to one of the forms of bad logic he lists at the outset and a novelist whose work utilizes that form of bad logic to investigate and represent the conceptual, ethical, representational, emotional and social challenges that desire manifests in our lives and in art.